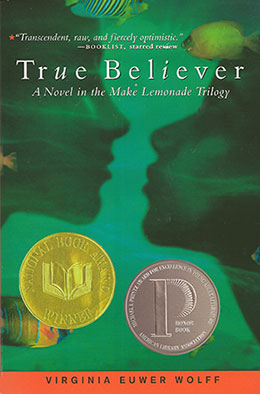 When LaVaughn was little, the obstacles in her life didn’t seem so bad. If she had an argument with Annie or Myrtle, it would never last long. If she fell out with her mother, they would have made it up by bedtime. School was simple. Boys were friends. Everything made sense.

But LaVaughn is now fifteen and the obstacles aren’t going away anymore. Big questions separate her from her friends. Her mother is distracted by a new man. School could slip away from her so easily.

“Eight years after the publication of her groundbreaking Make Lemonade, Wolff has surpassed herself with this sequel. With delicacy and sensitivity, Wolff examines the tensions that grow out of LaVaughn’s decision to improve herself while leaving others behind, her choice to forgive in the face of Myrtle and Annie’s intolerance, and her ability to trust despite a dangerous world. In delving into LaVaughn’s life, Wolff unmasks the secret thoughts adolescents hold sacred and, in so doing, lets her readers know they are not alone.” (Publishers Weekly)

“‘My heart was so stretching, like a room wanting company,’ LaVaughn says at the end of Make Lemonade. In this equally powerful sequel, LaVaughn, now 15, challenges her heart’s resilience again when she develops her first deep crush. Other things are going on as well. She drifts apart from her best friends Myrtle and Annie, who join a ‘Cross Your Legs for Jesus’ club; her mother dates for the first time since LaVaughn’s father died; and always there is the poverty and violence of the neighborhood, the pressure of school, and her unwavering goal to get to college. … As in Lemonade, LaVaughn tells her own story in heart-stopping stream-of-consciousness that reveals her convincing naivete and her blazing determination, intelligence, and growth. Yet the writing style still allows the supporting characters to shine. Transcendent, raw, and fiercely optimistic, the novel answers some of its own questions about overcoming adversity when, in the end, LaVaughn’s strength and capacity to love surprise even herself. A natural for reader’s theater, this will capture even reluctant readers” (Booklist, starred review)

“[A] heartbreaking story, truthful in its pain but buoyed by LaVaughn’s resilient spirit and by a redemptive and earned ending.” (Horn Book, starred review)

“When Wolff writes a book, it’s an event. When she revisits LaVaughn, as she does in True Believer, it is a prodigious gift. This book stands alone, but includes a cameo appearance by the hapless Jolly (Make Lemonade, 1993). In the course of LaVaughn’s seismic 15th year, she grapples with all the big questions of teen life: the drifting away of lifelong friends, setting life goals, falling in love with the wrong man, making sense of sexuality and abstinence, and questioning the existence of God. Or, as LaVaughn puts it, ‘My life is so swollen with things …’ With wisdom, snap, and a touch of profound sadness, LaVaughn confronts her best friends’ slipping away to ‘be all the property of Jesus,’ the deeply wounding discovery that the boy she loves is gay, and the acknowledgment of her own character flaws. She is accused of being ‘uppity’ for her academic achievement, her refusal to join the ‘Cross your Legs for Jesus Club,’ and her disdain of a brilliant, shabby lab partner. With every aspect of her life in tatters, LaVaughn confides in her scrappy mother (also an uppity woman) and begins to ‘rise to the occasion which is life,’ bringing together the rich cast of characters who inhabit her world at a sweet-16 party. The urban setting, in which six children in LaVaughn’s fourth-grade class have died violently, is effectively but unsensationally sketched. In economical blank verse of graceful simplicity, Wolff unerringly reveals the inner depths of her heroine. While LaVaughn feels isolated in her confusion about life, she is surrounded by adults (including demanding, mentoring teachers) who will not allow her to fail. This is a coming-of-age story with both bite and heart, which poses more questions than it answers but never runs out of hope. (Kirkus Reviews, pointer review)

“The language of this occasionally gritty story resonates with truth, personal growth, and the vision of a better life. While there are some mature themes, they are handled very gently. Every teenager should have the opportunity to meet LaVaughn.” (School Library Journal, starred review)

“True Believer picks up where the acclaimed Make Lemonade left off. Virginia Euwer Wolff’s verse-prose is as sumptuous as ever, and her descriptions of LaVaughn’s day-to-day life and feelings are sympathetic and achingly real. Readers will be eager to see where LaVaughn’s choices take her in Wolff’s next installment.” (Jennifer Hubert, Amazon.com)

“While many YA books, explicitly or implicitly, treat the topic of growth and maturation, few capture it as vividly as this title.” (Bulletin of the Center for Children’s Books, Blue Ribbon Book)