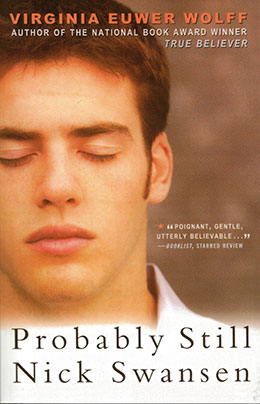 Nick Swansen pretty much knows what it means to be Special Ed.: You can’t drive, even if you’re sixteen and your parents have two cars; the regular kids in school don’t talk to you much; and even if you can memorize every fact about amphibians, it’s hard to make sense of all the other stuff swirling in your mind. What he doesn’t know is whether being Special Ed. means you shouldn’t go to the prom. But since no rule says you can’t, Nick decides to ask Shana.

But the prom doesn’t turn out at all the way Nick expects it to, and everything bad seems to get all mixed up together: the prom, what Shana does, and the terrible thing that happened to Nick’s sister nine years ago. Nick doesn’t want to think about any of it, but he begins to realize that unless he makes peace with all the memories that trouble him, they will haunt him forever….

“Poignant, gentle, utterly believable … An optimistic but real look at the difficulties faced by special kids caught between their limitations and their longing to experience life like everyone else.” (Booklist, starred review)

“A strong, compassionate story about a student with minimal brain dysfunction. While all 16 year olds have problems, Nick Swansen’s are unique: they involve his identity outside the Special Education classroom and coming to terms with the accidental death of his sister, Dianne, seven years earlier. Told from his viewpoint, the story follows the events of several seminal weeks in Nick’s maturing. Readers come to identify strongly with him and with Shana, another Special Ed. student who has ‘gone up’ to the regular classes. The parents of both students provide a revealing contrast: Nick’s are warm and understanding, Shana’s stumbling and confused. The brilliance in Wolff’s book is that she never preaches: rather, through a series of involving events and through characterizations that are consistently sympathetic, she draws readers into Nick’s life. Unlike many books that deal with disabilities, Wolff’s story stresses the similarities between Nick and other teens rather than highlighting the differences.” (School Library Journal, starred review)