When the writer Gertrude Stein was a girl, she wondered what she would do to occupy herself when she had finished reading all the books in the world. When I was a kid I couldn’t imagine even getting through the G’s on the alphabetically arranged shelves in the library. Maybe you find yourself in between those extremes.

I was the last child in my rural first grade class to learn to read. And I lived in a house filled with books, paintings, lots of light and shadow (we had no electricity), dictionaries, a set of Encyclopedia Brittanica, colorful calendars, newspapers, magazines, and cereal boxes that would tell me everything I needed to know about the breakfast of champions. We had a grand piano and a flat porch roof you could stand on and see over the tops of the orchard trees to forested hills and snow-topped mountains. We had a stone fireplace you could actually walk into if you were very, very short. Our father, a lapsed lawyer turned orchardist, had built our house of logs, and it was a grand home indeed. Not a log cabin; more like a smallish log lodge. We were privileged children because we had the most interesting stuff in our house to ask questions about.

And yet. My classmates who had no socks and no dentist were reading about the well-behaved Dick and Jane before I had understood flash cards with “cat” and “dog” and “the” on them. I’m a reader now, of course. But still, that scared little kid with bruises on her knees and uncombed hair lives inside me, ready to come out and fail when I begin reading a thick book with hundreds of pages covered in small, gray print. You probably don’t want to know how many years I took to gather the courage to read Moby-Dick and War and Peace. (And I found they were both absolutely worth the wait; I couldn’t have come close to living fully in those stories when I was young.)

I suppose there were reasons enough for my delayed reading. And when I became a teacher, I learned that there’s such a thing as “reading readiness.” Who knew that when I was six years old? Not me.

My first grade teacher never let me know I was last. I had to figure that out years later. She had kept it a secret from everybody, in order not to embarrass me. (And does anybody doubt that our first grade teacher is the most influential one we’ll ever have?) Her first name was Verna. She died years before I turned into an author, but eventually I needed to thank her for her kindness: One of my fictional characters is named Verna. (That character is almost never called “Verna,” but instead uses her middle name.)

I think Robert Cormier was instrumental in moving me from wanting to write to sitting down and writing. I probably wouldn’t be writing today if I hadn’t read The Chocolate War, which had to live in the back of my mind for at least a decade before I put fingers to keyboard to try my own YA fiction. What a gift Cormier was to our field, what a consciousness. 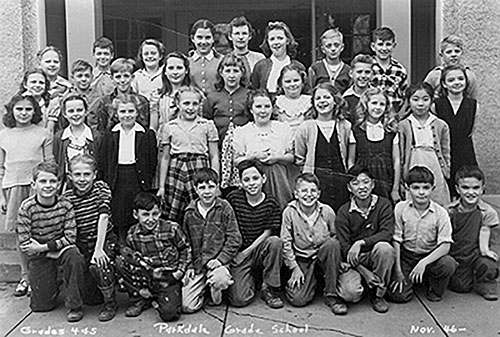 Our fourth and fifth grade class in elementary school.  We fourth graders got to overhear what the fifth graders were learning. I don’t know if educators have ever decided that this is a good way to group kids. What it meant for us was that we had a large enough class to have big teams in arithmetic, baseball, and spelling bees, as well as lots and lots of food at the potluck picnic at the end of the school year.

I Saw You Reading

Our buses idled at the red light,
I looked through my window and yours,
inches apart,
at the cover of the book you wouldn’t look up from.
It’s exactly the cover on my book.
The one in my lap. Best book I ever read!

I jumped.
I hit the window with my fist,
others noticed and tried to help,
in a moment 7 or 8 of us were banging on windows,
shouting. “Hey, you! With the book! You! Hey! Look up!
Hey! You! Look! The book! In your hands! Hey, you!
You! Look!”
You turned a page.

The light turned green,
our buses slowly sighed and lifted off,
yours turned right, ours ambled straight ahead,
I’m still in chapter 9.
You would have liked me,
I know you would have. I know it.

This poem originally appeared in The Horn Book, May/June 2005.